“Goat” released in the U.S.

“Goat”, starring Nick Jonas, James Franco and Ben Schnetzer is released on SVOD and in U.S. cinemas by Paramount Pictures and MTV on 23rd September. From director Andrew Neel, Goat’s unflinching take on toxic masculinity and brotherhood was one of the highlights of the 2016 Sundance Film Festival.

Reeling from a terrifying assault over the summer, 19-year-old Brad Land (Schnetzer) starts college determined to get his life back to normal. His brother, Brett (Jonas), is already established on campus and with a fraternity that allures Brad with its promise of protection, popularity, and life-long friendships. Brad is desperate to belong but as he sets out to join the fraternity his brother exhibits reservations, a sentiment that threatens to divide them. 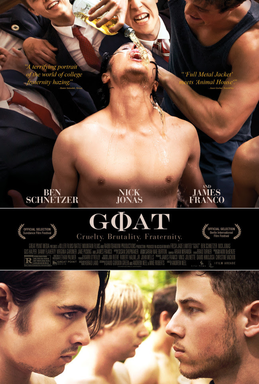